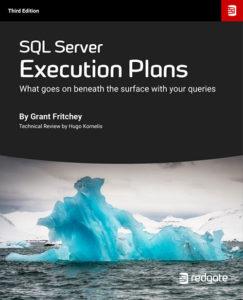 Four years ago, after a bunch of dithering and some negotiations with Tony Davis, my editor, I started to update my book, SQL Server Execution Plans. We managed to convince Hugo Kornelis to be the tech editor. I started to do the real writing in early 2015.

We all came to the conclusion that the old book was wrong. Not simply in a technical sense, although there was a lot of that, but in a structural sense. So we started rearranging things. SQL Server 2014 came out, but I was ready for it, having been on a preview, so it was no big deal. We started a second draft.

Also, we were struggling with how to include Azure SQL Database. Draft Two had that in it’s own chapter. I started to dither. Tony took a sabbatical (I think). Hugo got sick. Things drifted.

OK, so a bunch of changes, but we got on top of them, put together a structure similar to what you see now, added a bunch of information about the Query Store (because, of course). Then heard that 2017 would be released before we could finish. Not only that, but, it had a lot of things we wanted to be sure were in the book, adaptive query processing, others. Some delays, lots of time spent learning.

Then Microsoft did two things, they split SQL Server Management Studio from the server install, no big deal, and they started an accelerated release cadence that suddenly included replacing ALL the execution plan icons.

Sure, I’ll go back through 500 pages and redo every single screen capture. I have nothing else going on. Oh wait, I do. I started rewriting my query performance tuning book right around this time (schedules, contracts, fear of another release of SQL Server before I could finish both books). Suddenly, all I’m doing, most days, is working on these books. First, one during the day for my boss at Redgate, the other at night and on weekends.

However, we had momentum going at long last and pushed on through before a fourth version of SQL Server could be released.

A little shy of four years later, I’m excited, pleased, relieved, to announce that the 3rd Edition of SQL Server Execution Plans is available. Thanks to my employer, Redgate Software, the book is 100% free to download. Follow this link and get your own copy. Feel free to share it with others. Just remember where you got it.

I want to personally, and as publicly as possible, thank Hugo and Tony. Without them, it would be a seriously crappy book. I believe they may have put in more work on it than I did. Gentlemen, I appreciate you more than I can express.