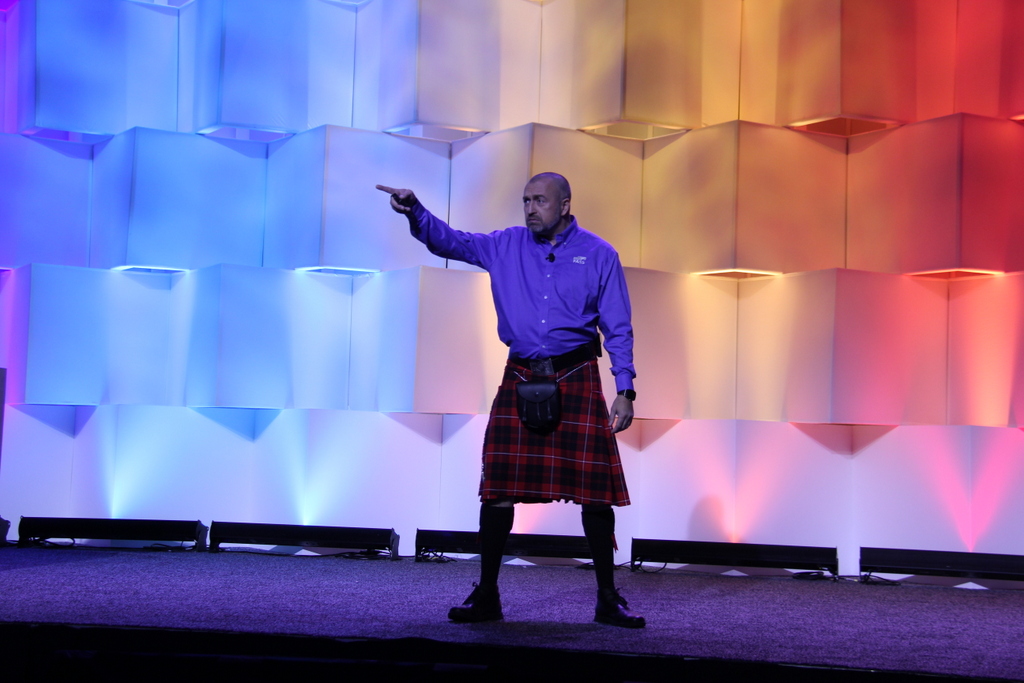 I got in on Sunday and chose to have a small dinner with a couple of friends, quiet, preparing.

Monday was a less hectic day than the others . The Board had the morning off, although Redgate had me go and give a session at an event. Monday afternoon was one of our three in-person board meetings. The minutes will be published soon. I was responsible for running the meeting. I also presented two topics, first, and most importantly, our current financial status. Then I presented the initial set of thoughts towards some SMART goals for Global Growth, which I will share once they are further developed .

Monday evening I had two events I had to attend. First, as part of the Executive Committee, I attended the kick off dinner for the PASS HQ team. Next, I went to the Friends of Redgate Dinner. Then, I went to bed early because the next day had a bunch of important meetings with the community.

Now things start to rock. We started the morning with a meeting with the SQLSaturday organizers. The meeting was run by the SQLSaturday portfolio owner, Argenis Fernandez. I was there as a representative of the Exec and as a member of the Global Growth committee. The gist of the meeting was to report on progress since last year, plans for the upcoming year, and as a chance for direct feedback from the community. It went well.

Next, I had a meeting with the Regional Mentors. This was co-run by myself and Ryan Adams. Ryan, as the Chapters portfolio owner, and I, as the Global Growth committee chair, have very similar thoughts and plans for how to expand and grow the duties, impact and opportunities for the Regional Mentors. These people are vital for the maintenance of the PASS community, and, I would argue, for the growth of it, especially globally. We largely discussed plans for the coming year.

I’m not done with Tuesday. I next went to the Chapters Leaders meeting, again as a representative of the Exec and the GG committee. Ryan’s meeting ran much like Argenis’ with a report on what has been done. Ryan is working hard to deliver on a number of initiatives,  including launching a Speakers Bureau. Ryan then outlined some plans and took feedback from the community.

In my mind, these were successful meetings because we got the word out on what we’ve been working on, and we got direct, positive and actionable feedback from the members of the community who took part.  Great stuff.

But Tuesday isn’t finished. I next attended the First Timers speed networking event. I co-hosted the event with Bill Graziano. It was a blast. Unfortunately, I had to leave early because I was booked to be in three places at the same time. I only made two.

I went to the Global Alliance Program partners’ reception with several members of the Board. The GAP partners are play an important role in supporting PASS’ growth. Thanks to all involved.

Next we had the traditional Tuesday night Welcome Reception. This is the easy part of the job. I was just there, walking around the room, talking to people. It was a nice night with lots of old friends and a few new ones.

Still not done because I went to the Volunteer Party. PASS is a not-for-profit organization and a heck of a lot of work is done by the volunteers, so we show our appreciation here. I had some great talks to follow up on the information raised at meetings during the day (yes, parties are work too).

Finally, I went to the Karaoke party hosted by Denny Cherry.

PASS Summit launches with the Wednesday keynote. I was there bright and early in case there was anything I could do to help out. It was all in hand, so I got to kick back a little and watch Joseph Sirosh deliver a bunch of great information and a positive vision for the Data Platform moving forward.

Following the keynote, the executive committee had a meeting with Microsoft. As one of our founding partners, and the reason we’re all here, we meet with Microsoft regularly. It’s great to have these opportunities to meet face-to-face with our key partners at Microsoft.  I truly appreciate their time and their feedback.

I was part of the keynote on Thursday, so I had to spend some time rehearsing on Wednesday. Not mentioned in the days above is the time I spent reviewing my slides and helping prepare the speech that goes with them. PASS HQ does most of the work after I set the vision, but I still had to ensure that I delivered the vision that I wanted.

I took some time after this to spend at the Redgate booth. I still have a job there to do.

In the late afternoon, I put on a regular session, The Query Store and Query Tuning in SQL Server. I had 550 attendees (no, not inside knowledge, I asked the room proctor on the way out the door) and I think it went well. I love the topic (just search the blog if you don’t believe me).

I went back down to the Redgate booth and worked until the Exhibitor Reception that night.

Done. I went to my hotel at 8PM this night in order to be ready for the next day.

Keynote time. Telling Summit  attendees how PASS is doing financially and, more importantly to me personally, how we’re doing growing globally. I’m pretty passionate about this message, and based on the tweets I saw later, I think it came across.

Oh, but before I gave my first ever keynote, I got to hang out in the Green Room (trust me, not exciting) with Rimma Nehme and Dr. David Dewitt (trust me, WAY exciting). Yeah, I was totally cool, and not a fan-boy at all… mostly.

Yeah, and I had to wear makeup because I was on TV in front of the giant screens. Not my favorite part of the experience.

Time for more meetings. I met with the finance team to discuss how we’re doing on the audit (great by the way) and lay down some plans for the coming year. I’m very excited with what they’ve done around finance, including putting together some details around the cost of SQLSaturday events. We’re doing more like this so that we can help all the various portfolios plan better for next year.

I went back to the Redgate booth to work some more. I also spent time in the Community Zone, just there to answer any questions that anyone had. I took a few notes from people, all that’s going to help us make good decisions going forward.

Redgate paid for one of the new sponsored sessions. We talked about SQL Clone and had a full room of people who were very interested.

Thursday night this year had no official event.  This enabled more community events to be planned and also allowed for less formal community gatherings to take place. From what I saw, this was a wild success. Game Night was created, and well attended. Various other community events sprang up. Vendors also had a night where they weren’t competing directly with PASS. In fact, I went to the Redgate Rocks event (we held a SQL Clone launch party in this wonderful space, good times).

Finally , it was Friday after a long, demanding, and rewarding week. Believe it or not, I only had two things that I had to do for PASS on Friday. First, I had an interview with Tony Davis for a vblog. Then we had the board Q&A in the afternoon.

The Board Q&A was held this year in the Community Zone. It let people wander in and out at will. I think it worked great. We had more and more people with us over time. It was a lot more than we see when the event is held in one of the smaller meeting rooms. It was a little hard to hear sometimes, but except for that, it really was fantastic.

After that, I had one personal mission. I’m pretty sure I didn’t succeed, but I tried to make a point of thanking each and every member of PASS HQ for the hard work they had done this week, putting on the…

Friday night I went into hiding and had a quiet dinner with a few friends (which means I excluded other friends, for which I’m truly sorry).

Sessions? What sessions? Other than the ones I put on, I was only able to see part of two of the Speaker Idol sessions (great stuff). Other than that, it was all PASS, or all Redgate, all the time.

Being on the board does change the Summit experience. It’s not worse. It’s different. In some ways, it’s better. I’m truly appreciative that you’ve all given me the opportunity to take part in putting something like this together. We’re now going to start ramping up for next year. If you have feedback, please, get it to us.