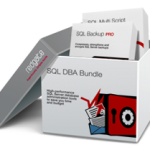 Let’s be honest. Database administration is not all that tough. Set up your backups. Test them. Get consistency checks on line. Some maintenance routines for statistics and maybe for fragmentation are also helpful. Set up security. In most of the important ways, you’re done. Sit back, monitor the whole thing and collect your paycheck.

The reality is that you’re dealing with constant change that throw this simple set of maintenance monitoring tasks into the garbage. No, you’ve got new databases under development. Sometimes by development teams that are absolute rocket scientists and you sit at their feet learning how they did some really cool piece of code. And sometimes by development teams that more resemble crazed monkeys throwing poo at the walls to see what sticks. There are upgrades to the third party tools your company uses to manage it’s finances/CRM/whatever. OS upgrades, SQL Server upgrades. You have changes to your data which introduces new performance problems. Parameter sniffing. What do you mean I have to put a WHERE clause on the DELETE statement? On, and on, and on. I’m not even scratching the surface for all the things that are constantly shifting under your feet or going wrong. No, this job is hard.

You have the tools you need to do everything. There’s the Transact Structured Query Language (T-SQL) that lets you manipulate data and objects. You’ve got the SQL Server Management Studio (SSMS) a graphical user interface to manipulate server, the databases, the objects inside the database, security, scheduling, some monitoring, performance metrics and others. You’ve got a powerful scripting language, PowerShell, to automate a lot of your work. Everything you need is already in your hands except one, time.

That’s where Red Gate Software can help. We recently modified our Database Administrator Bundle. Some of our toolset was only available through either the entire software set in the Toolbelt or through the Database Developer Bundle. But, these tools are needed by DBAs. Yes, we’re still including vital tools that are absolutely at the foundation of what you do as a DBA; SQL Backup Pro to get your backups in hand, SQL Monitor to keep an eye on your servers and databases, and SQL Multi-Script which lets you run distributed scripts across multiple machines & multiple databases. But now you’ve got what were considered “developer” centric tools. Let’s face it, yes, these are tools used when developing databases, but, as a DBA, you write as much T-SQL as any developer, probably more, so having a copy of SQL Prompt is a must. You’re maintaining production databases, yes, but you’ve also got multiple test, development and other environments. So SQL Compare and SQL Data Compare are a major piece of a well-appointed toolset.

In short, Red Gate reoriented the DBA Bundle in ways that are going to provide a positive impact in helping you do the hard work of database administration.