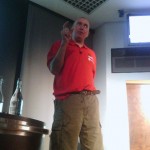 How’s that for a recap?

The concept for the SQL in the City events is pretty simple. Put on a free event that instructs people on SQL Server, Azure, and related technologies along with a healthy smattering of Red Gate tools. All teaching is done by some of the best people in the business (and me).

This was the second event in London. The concept was launched there last year and succeeded quite well. This year the event filled it’s registrations so quickly that Red Gate felt obligated to have a second day, which almost completely filled up too. There were more than 350 people in attendance on Friday, and then, on Saturday, a day off, another 250+ people showed up. That’s well over 600 attendees over the two days. And what people! The UK audience is just excellent. These people really pay attention to what you’re saying. They don’t make many comments while the presentation is going on, but oh my gosh the detailed questions you get afterwards. It’s just wonderful. Plus, these guys are part of my #sqlfamily. I got to meet several people that I’ve met before in both the US and the UK. I love spending time with Tobiasz, Dave, Kev, Annette, Jonathan, Thomas, Neil. I also got to meet people that I had interacted with only online and they’re wonderful in person. Thanks to everyone who sought me out, especially Colin and Stephanie. It was a real privilege to meet you two (although neither of you knows the other). It’s the interpersonal aspects of these events that makes them great.

It’s so nice to be able to relax and show people something like how to get a sandbox environment set up, but all the ways that using Red Gate tools to do it can help you make the job easier, faster and cheaper. Normally you can’t give an open answer when someone asks how to do something better or easier during a session. This venue makes that possible.

I put on three sessions during the day. One on how to improve performance, yours and your code, in T-SQL. I got to regale the crowd on all the evils of ddltbl (not a typo, you had to be there) as well as common, simple, mistakes made all the time in T-SQL code. I also did a session on sandbox deployments. While I’m personally against giving everyone & their brother a copy of the production database for development, I acknowledge that it is a good set of data to develop against. So, if you have to do it, you may as well use Virtual Restore to save some space. Finally, my last session was on some of the lesser used performance metrics that are actually more useful than people give them credit for.

I sat in on some of the other presentations and they were great. I really liked Steve Jones (blog|twitter) session on handling disasters. I also liked watching a new speaker, Annette Allen (twitter), stretch her legs for the first time. She was good. UK user groups take note. You have another resource available.

I had a blast presenting all these sessions, twice, and the crowds seemed receptive. I really appreciate everyone who attended and the excellent feedback that they politely (but firmly) provided. Then we had beer.

Yeah, you heard me. Wonderful, glorious, Red Gate beer served right there at the event. It was a great batch of Select * Ale. Highly recommended at the end of a hard day of T-SQL learning and networking.

It was a magnificently run event. The only complaint I heard was that we had an inadequate number of bathrooms for the men (which, I learned, are not called stalls in the UK, some humor doesn’t translate well). Thanks to Annabel Bradford and all the team at Red Gate who put the event together (even if I do work for them, it was a really well run event). You guys are magnificent.

If you missed a session while you were there or you want to see a session again, keep an eye on the SQL In The City web site. Videos of the sessions will be uploaded. If you weren’t there, you missed it. But, I have good news.

We’re taking the show on the road. We’re going to be hitting five cities in the US in September and October and then Seattle in (which I think is still in the US) in November. It’s going to be a lot of the same people presenting the same topics, but it’s also going to include a ton of excellent local speakers at each of the cities we hit. This means the excitement and education that SQL In The City represents will be accessible to lots more of you soon.