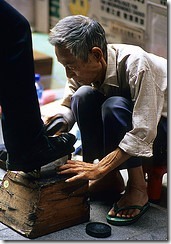 Gee thanks Jes (blog|twitter). Just what I wanted, a little extra work on a Friday afternoon. I used to like you.

We have a tagging theme started by Ted Krueger (blog|twitter) who I also used to like.

The theme is: Deciding that I need to delete and start all over

Lordy I hate this one. See, I find it easy to decide that I need to delete and start all over. My challenging task is persevering. But… here’s the rub. Because my challenge is persevering, I have a tendency to try to persevere when I really should be throwing in the towel.

I don’t have a technical example of this ready at hand (I did mention it was the afternoon on a Friday, right?), but I do have a presentation example. One of my presentations from last year… let’s say the topic wasn’t one I wanted to do. But, I had to. So I busted my hump on the slide deck. When it was done. I knew it was a steaming pile. But I sent it out for review anyway. Guess what. It was a steaming pile. They really didn’t like it, but suggested changes.

So I went back to work on the pile. Basically trying to take the substance, brown & smelling, and rearrange it to something resembling a pleasing shape. I worked at it. Hard. I tried different slides, jokes, anything I could think of to try to make this stuff resemble something of value. When I finally thought I had the pile in as pretty a shape as it was going to get, I sent it off to a second person for review. This person, a friend, didn’t pull a single punch. “Throw this out and try something completely different.”

Now that’s what I had wanted to do ever since I struggled through the first four or five versions of this slide deck, but I fought against my common sense and tried to do the hard work rather than take the “easy” way out and chuck it all and start all over.

Sometimes, you need another person’s perspective to realize what you’re vigorously polishing is not actually a diamond, but something entirely different.