If you’re like me and you’ve been running the public Client Technology Preview (CTP3) of SQL Server Denali, uh, I mean 2012, then the news about the release of RC0 is pretty exciting stuff… until you realize that you’re going to have to tear down your virtual test machine, removing the CTP in order to prep for the install of RC0. I love playing with the toys, but I hate working on the toys, if you know what I mean.

Great news. You can upgrade from CTP3 to RC0 in place. I know because I’ve done it. When you run the install and you get to the screen that asks what type of install you want, select Upgrade, as highlighted below: 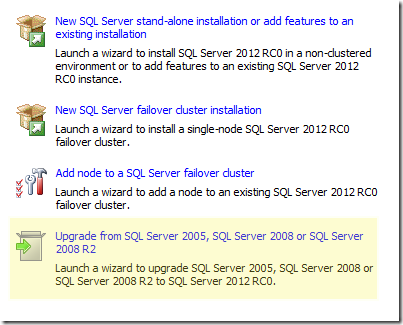 NOTE: Do not plan to do this for your production box. I say again, production is different. I would not recommend planning on having an upgraded from CTP box in production. I’m talking about test machines here.

Now, caveat time. It hasn’t worked for everyone. Evidently if you “press the Add Current User button on the Distributed Replay Controller screen” it’s kind of like crossing the streams. Bad things happen. I don’t know of anyone who has tried an in-place upgrade of multiple High Availability servers, but stand-alone servers seem to go just fine.

Oh, and one more note. A little bird (well, a large-ish bird by the name of Kendal Van Dyke (blog|twitter)) told me that you should always snapshot your virtual before starting this sort of evolution. I say that’s crazy talk.