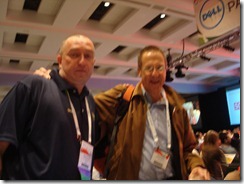 Another Summit done gone by and I’m exhausted. You know you did the Summit correctly if you’re crawling onto the plane to leave because you can no longer stand. That’s where I was on Saturday.

I’m going to go ahead and write down a few thoughts about the Summit, but I want to point you over to Andy Leonard’s (blog|twitter) blog for what is a truly great summary. I won’t blame you if you read that & skip this.

This year the Summit was amazing. I think it’s probably the best run Summit I’ve attended. From registration on Sunday night, to the final sessions on Friday, everything was dealt with in a timely and professional fashion that made the place a joy to attend. Huge kudos to the staff and the volunteers who organized and ran it.

Want to know what PASS is about? Connect, Share, Learn. Yeah, that’s the new SQL Chuck Norris at the end. More on that in another blog post. But that’s it. It’s the people. You make connections with marvelous individuals at the Summit. Then, you share with them. They talk to you. You talk to them. You both learn. It’s a glory. If you’re not meeting people at the PASS Summit, you’re doing it wrong. Other conventions may be all about the vendor floor or the sessions, but PASS is all about the people (and the vendor floor and the sessions).

My own experience started with presenting a pre-con with Gail Shaw (blog|twitter). All I’ll say is, Gail & I had glorious fun. The MVP party was Monday night and… wow! Thanks Microsoft. Tuesday I attended some sessions away from the Summit. Tuesday night I went to the First Timer’s event because I wanted to see what Tom LaRock (blog|twitter) had cooked up. It was great. The big sister/brother program at the beginning was slightly rocky, but from there it took off. The reception was great and the Quiz Bowl rocked, again (although I missed half of it because I was sent off to get beers for people on stage, proof of my love for them, Chuck, Andy…) Then it was down to the Red Gate/SQL Server Central party to see a dear friend receive the Exceptional DBA of the Year award. Jeff Moden should probably get an award for the Decade, but that hasn’t been invented yet.

I was invited to sit at the bloggers table (which I’ve now dubbed “the problem children’s table” we’ll see if the moniker sticks) for all three key notes. I live-blogged every one and you can read about them here. Dr. Dewitt (blog) stole the show… again. It actually sounds like he might be back next year too. Very exciting. And yes, that’s a picture of me with Dr. Dewitt. The restraining order hasn’t been issued yet.

Over the week I only attended a few sessions, two-three a day. It’s just hard to stop talking to people. Plus, this year, I worked the Red Gate booth as a vendor as much as possible (I had to leave several times to do other things, like attend the Women In Technology lunch for the first time). That was incredibly hard work. My hat’s off to all the vendors. You guys have no clue just how much they’re busting their humps in there. We announced a little contest on Wednesday. Looks like fun.

I want to point out one individual who just, for want of a better term, assaulted the Summit. This was her first PASS Summit. She organized and led the first ever #sqlrun (a bunch of people got together at 7AM and ran two miles, although I cut out early to shower before the key note… you’re welcome), presented a session at her first Summit, was the host for Women in Technology, met just about every single person at the Summit, and was just a glorious little bundle of energy through the whole thing. Jes Borland (blog|twitter) is one to watch.

During the week, the book SQL Server Deep Dives 2 was released. All proceeds from the book are going to Operation Smile. If you attended the summit you can download a free sample of this book and Volume 1 from Manning.

Taken as a whole, the Summit was just simply wonderful. This community just doesn’t stop giving, and sharing. I’m so glad I get to take part in it.