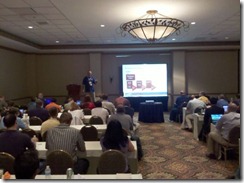 The first ever SQL Rally was held just last week. It was an excellent time. The event was organized and run by PASS. Which means, in  effect, it was a like a mini-Summit. I’m struggling a bit to come up with the words to describe what the event was like. It was so much more than a long SQL Saturday, but describing it, as I just did, as a mini-Summit mischaracterizes it as well. I guess it must be it’s own critter. Let me just tell you what went on, maybe that will help.

The event was held at a very nice hotel, the Marriott World in Orlando, Florida. The Rally proper was two days long, but there was a set of pre-conference seminars held the previous day, making the total event three days in length. All the sessions and pre-cons were selected through voting by members of the SQL Server community as organized by PASS, which means there was a real mix on speakers, some the experienced names you know and some totally new. I was lucky enough to have enjoyed the faith of the community which resulted in spending Wednesday giving an all day seminar on performance tuning to 98 attendees. I had a blast! The people there were wonderful, engaged, smart, asking challenging questions, more than a few of which I didn’t have immediate answers for. The smaller size of the event, even during the pre-con, gave it a very intimate feel. I received a lot of positive feedback from the people attending and I’ll post the evals when I get them.

The first night, Wednesday, we went out to a chicken wings restaurant which will remain nameless since the service was horrific and a couple of my co-workers got food poisoning from. You can track down the name of the place, don’t go there. Aside from that though, it was like a high school reunion, but instead of being peopled with your tormentors, it was filled with friends. We had a blast and it went long into the night and moved to another bar.

Next morning was the launch of the event. Unlike the Summit, and more like a SQL Saturday, we just started getting our learn on. Sessions kicked off and people were going. I spent most of my time, both days of the Rally, in the vendor hall, earning my paycheck at my new and glorious job. I could have attended sessions, and did go to one, but I really did want to spend more time learning how to do what I’ll be doing in the future at more SQL Rally events, SQL Cruise, SQL In The City, Connections, PASS Summit, SQLBits, SQL Excursions (should I ever get invited), SQL Saturday… you get the idea, from the excellent pros that I work with at Red Gate. But I kept asking everyone how the sessions were. The majority of the feedback I received was extremely positive, so I think the attendees had a good time.

Did I mention on Wednesday night it was discovered that one speaker wouldn’t make it on Thursday? No, well, I filled in and did a session. Maybe I was tired from the all day pre-con, but I decided to do a session with an incomplete slide deck that I had never rehearsed. It’s one I’m putting together for SQL Cruise, but hadn’t finished. Again, I haven’t seen evals yet, but the feedback I got was pretty good, and I was able to spot a few rough patches that I can fix to make this presentation better.

At the end of the day were the Lightning Talks, hosted by Jorge Segarra (blog|twitter) and SQL University. I gave one called Test Your Backups. There will be a video available. I apologize for the content in advance. I also learned at the lightning talks, well, re-learned would be a better description, that I don’t know anything. Thanks to Jen McCown (blog|twitter) for that bit of information.

Then… SQL Rally kept going. They introduced some new stuff called Overdrive. Three different sessions running simultaneously, a speed networking event, that I would have liked to have seen, a training session how to do job interviews, that I would have liked to have seen, and the Birds of a Feather discussion, that I did see because I was supposed to be running a table on perf tuning & indexing, etc. Ended up becoming a free for all conversation on indexing, vendor politics, job hunting, Naval nuclear power, and whatever else I’m forgetting.

By the end of that day, on Thursday, I was utterly exhausted. When the Red Gate team invited me to a quiet dinner, I gladly accepted and skipped the evenings festivities, which I understand were somewhat epic. I’ll leave that story to those who were there.

Friday was more learning and more time speaking with attendees about the great stuff they can do with Red Gate products (yeah, yeah, I’m trying to keep the marketing to a minimum here) and one session that I attended. It was as good a day as Thursday, but I had to cut it short to hop a plane for home.

In summary, this event was different. It was more than a SQL Saturday, which is good, because they so frequently go by in a flash. It wasn’t as much as the Summit, but that’s good too, because it really allowed you time to spend with people, which is great. I understand that more of these are planned, and I think that’s going to be a good thing. It seems like it’s a nice way to get people close together for a period of time to allow for better interaction than what’s provided through a SQL Saturday. I also liked the 90 minute format on some of the presentations. I think the idea of making these community driven events with voting is also a good idea, but that does mean that they have to be organized very far out to allow everyone presenting time to get their presentations together. In short, great event. Well done volunteers and PASS. I’ll go to another if I get the opportunity.