All the wonderful functionality that in-memory tables and natively compiled procedures provide in SQL Server 2014 is pretty cool. But, changes to core of the engine results in changes in things that we may have developed a level of comfort with. In my post last week I pointed out that you can’t see an actual execution plan for natively compiled procedures. There are more changes than just the type of execution plan available. There are also changes to the information available within the plans themselves. For example, I have a couple of stored procedures, one running in AdventureWorks2012 and one in an in-memory enabled database with a few copies of AdventureWorks tables:

The execution plans are obviously a little bit different, one going against in-memory tables and indexes and the other going against standard ones. However, that’s not the point here. This is the point. One of the first things I always check when looking at a new execution plan is the first operator, the SELECT/INSERT/UPDATE/DELETE operator. Here it is from the estimated plan of the query against the standard tables: 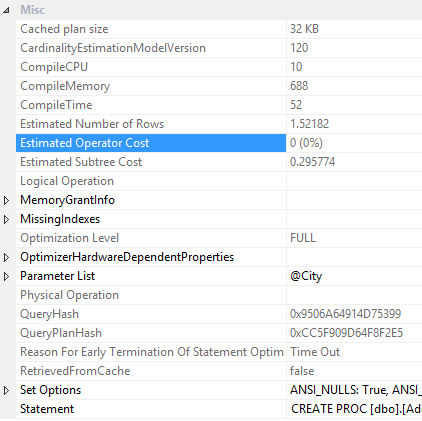 All the juicy goodness of the details is on display including the Optimization Level and Reason for Early Termination, row estimates, etc. It’s a great overview of how the plan was put together by the optimizer, some of the choices made, useful information such as the parameters used, etc. It’s great. Here’s the same thing for the natively compiled procedure:

Uhm… where are all my wonderful details? I mean, honestly, everything is gone. All of it. Further, what’s left, I’m pretty sure, is nothing but a lie. Zero cost? No, but obviously not from the standard optimizer estimates either, so, effectively zero. I’m pretty sure Physical Operation is just there as an oversight. In short, this is a different game. Yes, you will still need to evaluate execution plans for natively compiled procedures, but we’re talking a whole different approach now. I mean, great googly moogly, there’s not parameter compile time values. Is that just ignored now? Are the days of bad parameter sniffing behind us, or, are the days of good parameter sniffing gone forever? And it’s not just the SELECT operator. Here are the properties for a Nested Loops operator. First the standard set: 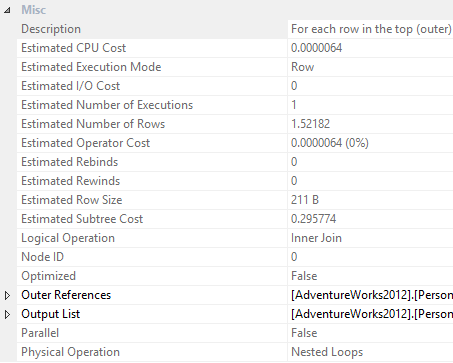 And, the natively compiled procedure: 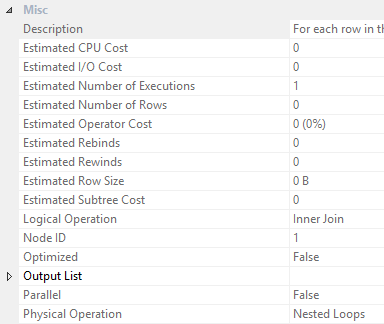 Now, except for the fact that everything is FREE, the differences here are easier to explain. Execution Mode is applicable to columnstore indexes, and none of those are available yet in in-memory storage, so I’m not shocked to see that property removed. Same for the others. But this complete lack of costing is going to make using execution plans, always a problematic proposition with only estimated values available for so many things, even harder. It might even make it so that all you really need to do is look at the graphical plan. Drilling down on the properties, until meaningful data starts to appear there, might be a waste of time for natively compiled procedures.

I’ll keep working on these. Next up, can you get a “bad” execution plan with a natively compiled procedure? We’ll find out.

Just a reminder that I’m taking this show on the road. I’m doing a number of all day seminars on query tuning at various events in multiple countries. Louisville has almost filled the room we have available on the 20th of June. Go here to register.  But don’t wait. I’m also going to be in Albany on July 25th, but we’re almost full there as well. You can register here. If you were thinking about attending SQL Connections in September in Las Vegas, In addition to regular sessions I’ll be doing a day on query tuning. Go here to register for this great event. In Belgium in October, I’ll be doing an all day session on execution plans at SQL Server Days. Go here to register for this event.