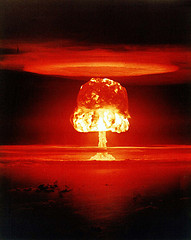 A lot of times you’ll hear how people are experiencing sudden, intermittent, poor performance on a query, bad parameter sniffing at work, so they’ll fix it by running the following code:

Yeah, you just nuked the cache on your server because you wanted to take out a single terrorist query. Now, yes, that problematic query is going to recompile and hopefully have a better execution plan. Also, so are all the other queries on your system. That spike in CPU and the slow-down all your business people are experiencing… Your fault for going nuclear.

Instead of a nuke, why not use a sniper rifle to just remove the one problematic plan. Here’s a little piece of code to help out:

Take a look at the documentation for FREEPROCCACHE. You can target specific plans using a plan_handle, a sql_handle, or even a resource governor pool by passing pool_name. I take advantage of that with this query to pull the plan_handle from sys.dm_exec_procedure_stats. You could use T-SQL text too, you’d just have to add in sys.dm_exec_query_text to one of the other DMOs that has the plan_handle or sql_handle such as sys.dm_exec_requests or sys.dm_exec_query_stats. However you choose to do it, you can use a targeted approach to remove plans from cache.

Let’s take the nukes off the table.

Want to really get into talking about the plan cache, query tuning, parameter sniffing and the rest? I have two upcoming all day pre-conference seminars. There’s still room at IT/Dev Connections in Las Vegas on September 14th. Click here to register. Also, at Connections, I’m hoping to be able to read your execution plans, so bring the really scary ones. Later that same week, I’ll be at SQL Saturday San Diego and will do a pre-con there on query tuning. Click here to get your seat.