I’ve been exploring execution plans in Azure SQL Databases a lot lately. I’m getting a presentation together for  some upcoming SQL Saturday events (first one is SQL Saturday #177, Silicon Valley). If you scroll to the bottom of this previous post, I mentioned that there were clearly differences in the optimizer because queries against empty databases were generating different plans. I’ve loaded up the data in my database, both SQL Server and SQL Database, so I can compare real behaviors. Doing so, I found a fun difference, even though I was running the query and generating the plan from SQL Server Management Studio.

Here’s the property sheet from the SELECT operator for the query run against SQL Server: 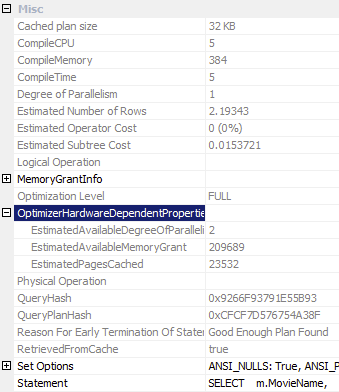 And here’s the property sheet from the SELECT operator for the query run against SQL Database: 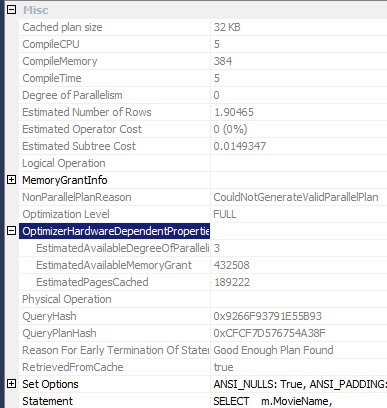 Two differences jump out. The smaller of the two is that for the same data set, there are differences in estimated values. I noted that before, but it’s fun to see it coming up. By the way, if a good estimate could be defined as “closest without going over” then the optimizer in SQL Database is closer with 1.9 to the SQL Server value of 2.1. Just sayin’. Anyway, the big thing that you may have noticed was the NonParallelPlanReason with a value of CouldNotGenerateValidParallelPlan. Oooh, cool! Not that I would have expected a parallel plan for an estimated cost of .0149347. Assuming SQL Database has a default value of 5 for parallel plans, that’s pretty far off (and I hope they don’t still use that ancient value, nor should you). Some enterprising individual could try to suss out how much cost is needed to get a parallel plan (I don’t have time for that right now). More to come on execution plans and query tuning in Azure SQL Databases.